When I was shopping for my first cello back in summer 2017, many people advised me to test the cello in different environments as well as have a trusted cello person, listen to you play because a cello always sounds different from a players perspective vs. audience perspective.  I’ve heard other say to have people play the cello I am considering but the other person may or may not make the cello sound different / better / worse than me so that kind of worked.

But how can I hear what the cello sounds like from the front of the cello when I play?  I’ve taken audio recorders to record myself play and that worked quite well but I couldn’t directly compare how it sounded from behind the cello vs in front of the cello because there is always a delay – you know, I have stop recording, plug in headphones to the recorder and then play it back.   I wanted to take it one step further.  I wanted a direct comparison between.  This year, I purchased two identical audio recorders so I could record my daughter’s classical guitar ensemble and solo performances and I am using them to test, “Does a cello sound different from the cellist vs audience perspectives?”

If you listen to it carefully, you can hear that the two perspectives have subtle, different sounds.  There is something about YouTube compression that makes it a bit more difficult to hear the differences.  On my video files watched on my computer, definitely easier to near the differences.  IMO the cellist perspective produces a dryer sound.

This was an interesting experiment, I’m not sure if there is enough difference with this setup that come to a conclusion.  I’d like to do another test in a music hall with the “Audience” recorder placed further away.

I recorded this in my family with two story tall ceiling, with laminate floors. I am using two identical Zoom H2N’s audio recorders, recording simultaneously, with the same recording settings – 256kbps recorded in MP3 file format.  The audio gain for both audio recorders were set to 7.  I used Adobe Premiere to Sync the video and the two audio files.  I edited the video files to make the colors more interesting.  I did not alter the sound quality nor volume of the audio files.

This is the Adobe Premiere Pro timeline that shows how the Video and Audio files were put together. 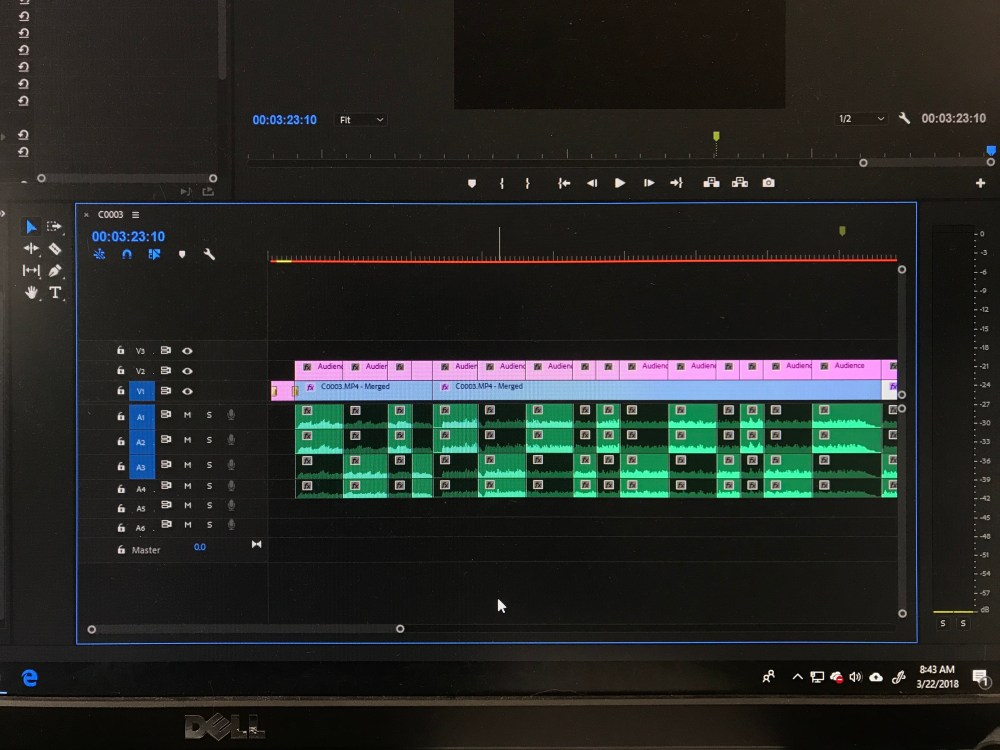 The H2n recording the cellist perspective was mounted on a tripod as close to my left ear as I could place it (actually it was so close, it actually impeded my left arm motion, just a little).

The second recorder I mounted on another tripod about 4 ft high and 8 feet away.  Sorry I forgot to take photo of this part.

3 thoughts on “The Sound – What I Hear Vs. What the Audience Hears”

View all posts by MikeK